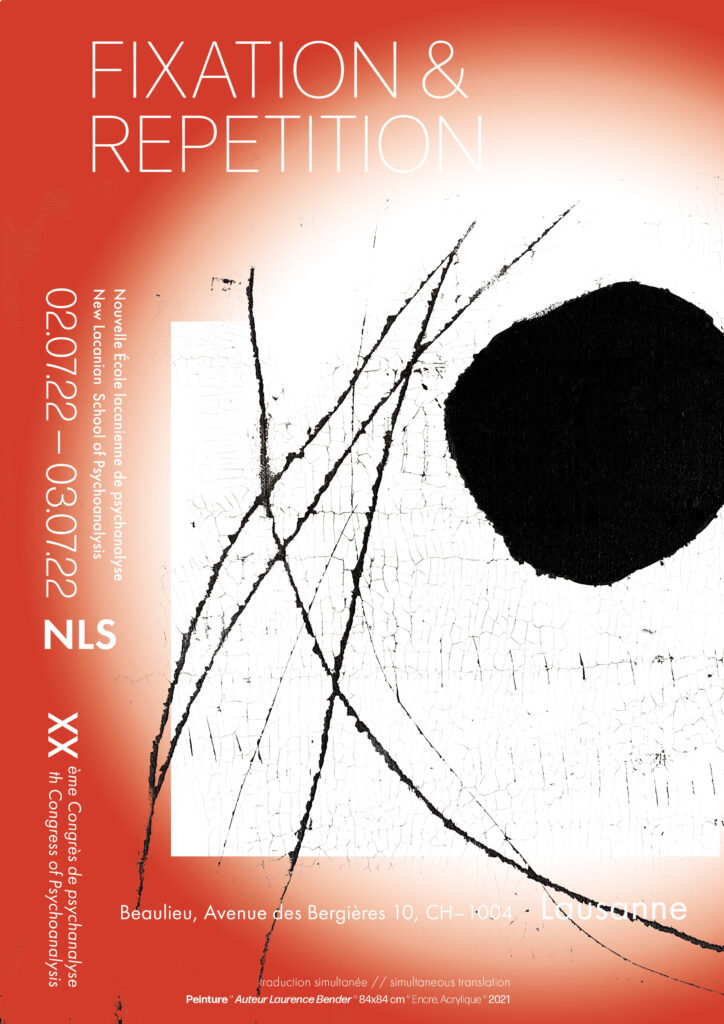 The 2022 Congress has concluded! 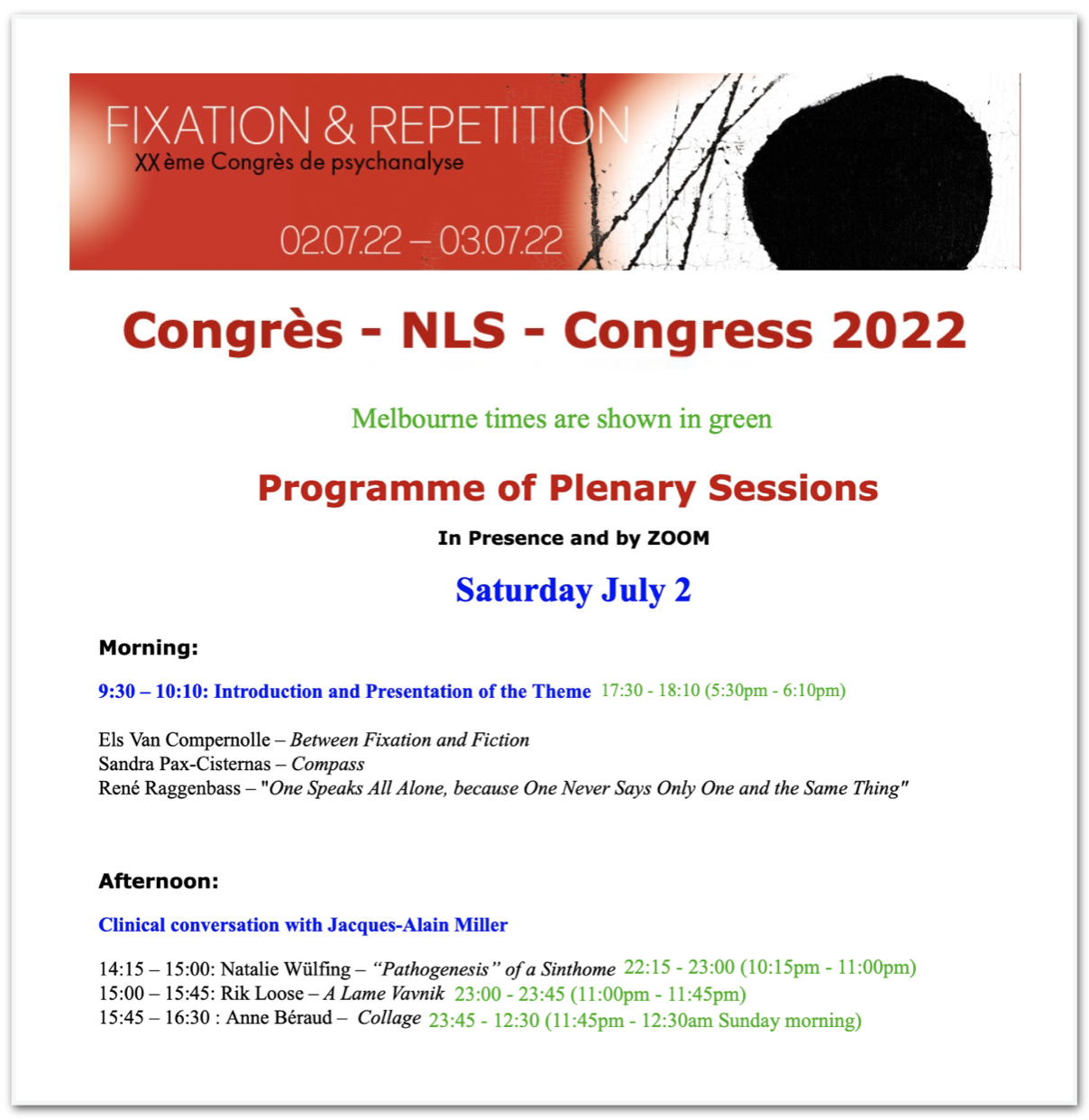 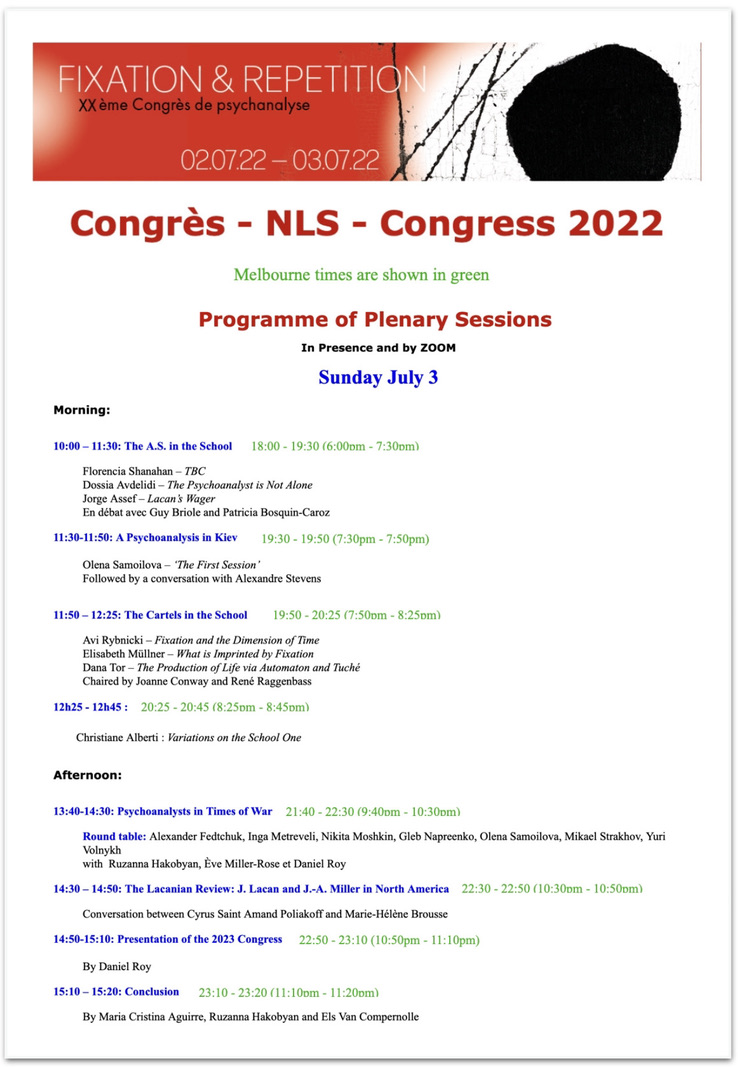 Repetition is one of the four fundamental concepts of psychoanalysis, as set out by Lacan in Seminar XI where, with repetition, he introduced a new mode of the real. To do so, he distinguished it from transference, which the post-Freudians had reduced to being merely the repetition of figures from the past.

As for fixation, it is a Freudian term, which Freud made use of in a rather discreet way and which was never given a significant place in his metapsychology. It was Jacques-Alain Miller, a careful reader of Freud, who gave it a new relevance when he took up the last period of Lacan’s teaching: “jouissance (…) is an event of the body. (…) it is of the order of trauma (…) it is the object of a fixation”. (1)  This was not the first time he had drawn upon Freud to propose a way of approaching Lacan’s last teaching. He had already proposed a reading of Inhibition, Symptom and Anxiety in this sense. (2)

I referred to the index of the Gesammelte Werke and found that fixation is a term that appeared for just about the first time in Freud’s work, in 1905, in his “Three Essays on Sexuality”. In the development of sexual life, Freud identifies initial disturbing factors – it being understood that it is disturbed, in varying degrees, for each person. In Freud, these first, constitutional factors are still not very precise. They contain what he calls a “pertinacity” towards the impressions of sexual life. It is this “pertinacity” (3) that he calls a “susceptibility to fixation”.(4) It is in later encounters, made up of “stimulations of infantile sexuality as are experienced accidentally” that this material “can become fixed as a permanent disorder”. (5)

This is the fixation, the elementary structure of which is already present here: there are first factors, revived by a traumatic contingency that produces a fixation in a symptom whose durable element allows us to infer a repetition. “Every step on this long path of development [of sexual life] can become a point of fixation”. (6) What will become clearer later is that these first factors always refer to a drive dimension.

In 1909, in his Five Lectures on Psychoanalysis, in other words his American lectures, he is more precise. Hysterical symptoms are described by him as “residues and mnemic symbols” of traumatic experiences and thus testify to a fixation to traumas. (7) This fixation does not only concern the signifiers of the trauma, the symbols, but also its charge of excitation, i.e., what he calls drive “residues”.

This is even clearer in Lecture XVIII of his Introductory Lectures on Psychoanalysis, which deals precisely with fixation. (8) This 1917 text is post-war, and the link is made here with traumatic neuroses. As in these, the fixation of the libido always occurs at a traumatic moment, and this is sometimes very early. The drive is stopped, inhibited, and fixed at a certain point in development.

Finally, in Analysis Terminable and Interminable, 1937, Freud says the following about the development of the libido: “even in normal development the transformation is never complete and residues of earlier libidinal fixations may still be retained in the final configuration”. (9)  For Freud, fixation is thus always linked to the repetition of a particular libidinal trait that has been traumatic, in other words, that has involved the irruption of a real. However, he brings the aim of the analytical experience to a halt at the rock of castration, without going beyond it, without aiming at this point of fixation. It is Lacan who will take the analysis beyond this point to the point of stripping it bare in the Pass, and what the Analysts of the School (A.S.) testify to is indeed this One of jouissance which is this fixation that Freud discovered without ever really addressing. We find this term in a several places in his work, but it should be noted that he never gave it much scope.

Jacques-Alain Miller is the one who connected this fixation with the One of jouissance in the last Lacan, where jouissance is no longer taken up in the dialectic of desire but becomes a purely contingent shock. You will find this development in the fourth and ninth lessons of Being and the One. (10)  “What Freud identified is what we formulate as the conjunction between the One and jouissance, a conjunction that makes the libido not susceptible to transformation, metamorphosis, displacement. What we mean by point of fixation is that there is a One of jouissance that always returns to the same place, and it is on this account that we qualify it as real.” (11)

Repetition, on the other hand, is a concept that is given an important place in Freud’s work. One of his texts is devoted to it, “Remembering, Repeating and Working Through”. (12)  In this text, repetition is linked to transference and constitutes a resistance in the treatment, even aggravating the symptoms. In Freud, the instinctual impulse remains implicit. This is what Lacan reverses, in The Four Fundamental Concepts of Psychoanalysis, when he separates repetition from transference and instead couples repetition with the drive.

And in Beyond the Pleasure Principle, it is repetition compulsion that, according to Freud, puts us on the trail of the death drive on the basis of the repetition of the traumatic element.  (13)

However, for Freud, as for Lacan before Seminar XI, repetition is essentially symbolic. The privileged example for this in Lacan’s teaching, is his Seminar on the “Purloined Letter” where it is a syntax that introduces signifying repetition with its automatic character. “[T]his automatism has the value of Freudian memory in the strict sense (…) One could say that at the beginning of his teaching Lacan makes the unconscious only a repetitive sentence that obeys the laws of symbolic determination”. (14) And we can add that this network of alpha, beta, gamma, highlights repetition as the elaboration of a knowledge, S2. (15)

“There is something honest in repetition, something well known”. (16)  There is no surprise in it. However, in Seminar XI, Lacan brings in a new kind of repetition. With the Aristotelian couple of tuché and automaton, he in fact introduces a new type of repetition. Here, while automaton is the signifying repetition that obeys the symbolic order, tuché is the irruption of a real, a chance encounter, which does not obey the symbolic order. It is the missed encounter, the one that is not inscribed in signifying repetition. It is what gives the object little a its place and thus opens up a new meaning for the real: the irruption of bits of the real, as bits of jouissance.

The tuché is an “encounter with the real” that “eludes us”, it “is beyond the automaton”, the irruption of a first encounter “behind the fantasy”. (17) It is therefore the repetition of a trauma. It is the real that is the principle of this repetition “that occurs as if by chance”. (18) “Here, already, in this ‘as if by chance’, we have the first indication of what, in his very last teaching, Lacan will bring to light as ‘the real is without law’. It is ‘the real as unassimilable’.” (19)

Lacan will subsequently link repetition ever more closely to the drive, to the point that in Seminar XVII, The Other Side of Psychoanalysis, “[h]e says that repetition is not thinkable, has no value, except on the basis of jouissance”. (20) And as Miller goes on to clarify: “What Lacan calls ‘knowledge’ in Seminar XVII is the transcription of the Freudian fable of repetition. What he calls knowledge is repetition insofar as it is in relationship with jouissance”. (21) Repetition is thus linked to the surplus jouissance that escapes the operation of the signifier.

This is the sinthome, written with a t-h, which is the last form of repetition and which we must now be able to read. It is no longer a question of discovering the advent of a signification, but of reading the letter of the event of jouissance that is repeated in the event of the body.

Jacques-Alain Miller has given us the paradigmatic example of this iteration, as a repetition of a new kind, which does not lend itself to interpretation but is articulated to jouissance. I quote from his text “Reading a Symptom”: “This is laid bare in addiction, in the ‘one more drink’ (…) Addiction is the root of the symptom which is made from the reiteration of the same One. It is the same, in the sense that it can’t be added up. One never gets to: ‘I’ve had three drinks, so that’s enough now’. One always downs the same drink, once more. It was in this sense that Lacan said the symptom is an et cetera, the return of the same event.”(22)

So, as you can see, the theme of our next Congress is also, in a sense, a logical continuation of this one.

[2] Jacques-Alain Miller, Le Partenaire symptôme, lesson of the 3rd and 10th of December 1997.