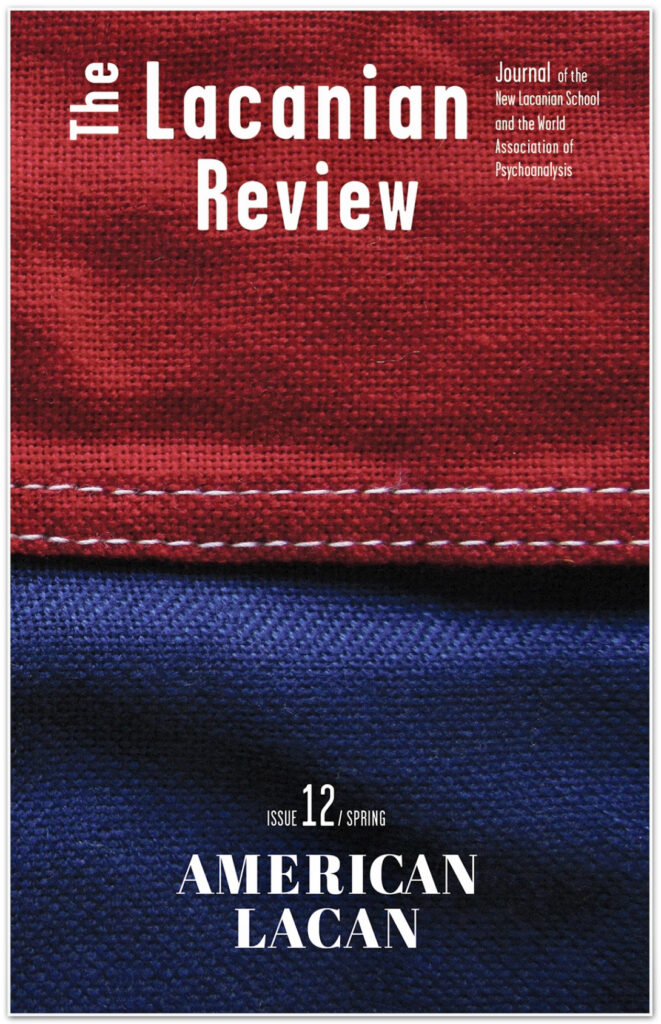 The Lacanian Review (TLR) #12 AMERICAN LACAN has been published!
The Lacan Circle have stock available for despatch now
Purchase below for delivery around Australia

The Lacanian Review No12 explores American encounters with psychoanalysis. Following the 40th anniversary of Jacques Lacan’s death, this volume collects histories of Lacan in the United States: how Lacan arrived, who listened, and what developed from transferences that moved through languages and across continents. Speaking about psychoanalysis in America, Lacan said, “. . .in truth everything can make itself heard in America.” In analysis, hystories unfold in the gaps between what is said, what is heard, and the very act of speaking. TLR No12 offers some vantages of the living history of the Lacanian orientation in North America.

Lacan journeyed to the U.S. three times, twice in 1966 and once in 1975. The Lacanian Review presents the first collected set of English translations of Lacan’s North American Lectures—with topics spanning topology, the symptom, and the body—including a new translation of the “Kanzer Seminar” given at Yale University. There, Lacan refers to psychoanalysis as an “epidemic” involving “radical rupture” and “spread.”

The contemporary global pandemic provides a moment to consider what is at stake in the transmission of psychoanalysis. With the effects of globalization and the digital sphere, the spread of words across borders becomes increasingly instantaneous and unavoidable. How does psychoanalysis, which requires the presence of the body and an effect of time, find its place in an era disoriented by both rupture and hyperconnectivity? TLR asked Lacanian analysts, in and out of America, to give account of their work right now—how they take up Lacan’s teachings, in their thinking, research, writing and contemporary practice.

Arriving at the Statue of Liberty in 1909, Freud brought the first wave to North America. Over half a century later, Lacan crossed the Atlantic at a moment when psychoanalysis was suffering from its success. So we turn to Jacques-Alain Miller’s first lecture in North America from 1984, newly established in bilingual format, “Lacan Clinician.” Another wave to investigate, not of the plague, but of the symptom. Interviews with Josefina Ayerza and Ellie Ragland in this volume of TLR shed some light on the symptom, the one that is incurable, and doesn’t stop becoming a cause for psychoanalysis.

Lacan demonstrated that analysis can locate something irreducible and irreparable. In sojourns of psychoanalysis to and from worlds, old and new, we also discover the importance of what is untranslatable. It keeps us translating and returning to Lacan, Lacan in English, Lacan in America: American Lacan.

Lacan, At the Moment
Angelina Harari, “Can They Possibly Be My Students?”
Alicia Arenas, The Unconscious, Where Did It Go?
Janet Rachel, English Exodus: Leaving England With Lacan
Thomas Svolos, Meeting the Subjectivity of Our Time
Maria Cristina Aguirre, When the Dust, the Sparks, the Smoke . . .
Isolda Alvarez, A Lacanian Glitch
Robert Buck, Constellation
Alexandre Stevens, With Lacan
Jorge Assef, Pushing the Impossible
Christiane Alberti, Lacan Redivivus: Preface